More than just the gods were created when Legel shattered himself in an attempt to prevent a complete defeat at the hands of the goddess Teva. The massive release of chaotic energy gave birth to other beings of tremendous might; while not as strong as the gods, they were far more powerful than any mortal. One such being was a nameless spirit of abyssal flame. This volatile spirit immediately set out on a path of incineration and destruction. Untouchable by mortal weapons, upon its manifestation the spirit headed straight into the heart of the Ancient Elven Woods.

Trees were consumed by flames and elves ran in fear as the spirit’s wrath consumed the greenery around it. But one elf emerged to stand against this menacing evil. A powerful spiritual leader named Helgaleshi, the elf boasted tremendous power. His deep connections with the spirit of the forest gave him the necessary leverage.
Ire set in at the sight of the flame spirit’s damage and Helgaleshi channeled his power in an attempt to bind it to his body and control its rage. But the effort failed. The fire spirit took control of Helgaleshi and became a terrible new being of even greater power that referred to itself as King Helga.

Desperate to stifle Helga’s rage and save their beloved kingdom, the remaining elven spiritual leaders considered their options knowing full well that they would have one chance to stop the beast. Aware that they were dealing with a being that was now part elf, the spiritual leaders lured the monster to the deepest part of the woods where the forest’s power was strongest. Arriving in a cave beneath the roots of some of the forest’s greatest trees, they called upon the spirit of the forest for help in controlling this new evil being. 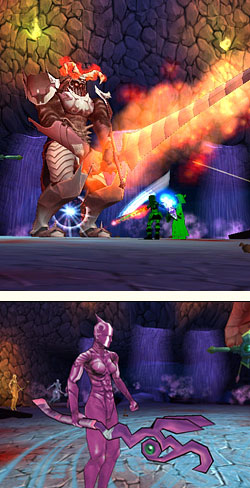 Despite domination by the spirit of abyssal flame, King Helga still contained Helgaleshi and could not resist the sweet lullaby of the elven forest. The beast soon fell into a deep sleep inside the cave at the heart of the forest. So too did the elves who bound him, and peace finally came to what is now known as the Forest of Slumber.

But that calm did not last long…
With the armies of the dark gods now running rampant throughout the elven woods, the forest’s song began to fall out of harmony. Having risen from his lengthy slumber, King Helga threatens the Forest of Slumber once again.
Have you the strength to defeat this evil?